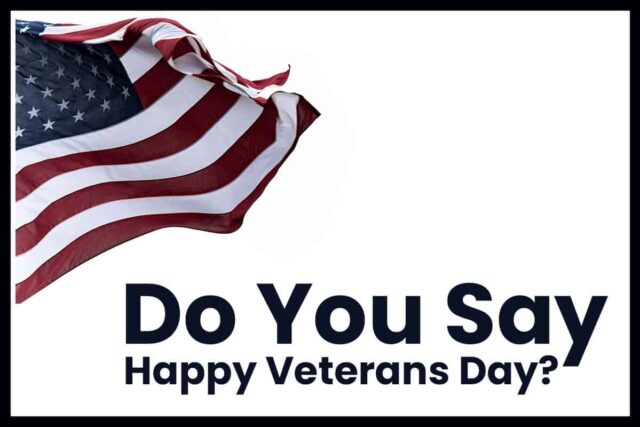 Do you say happy Veterans Day? Veterans Day is a federal holiday in the U.S. It’s observed every year on the 11th of November.

Veterans Day was formerly known as Armistice Day. The day is saved to show gratitude to military veterans. Serving honorably in the military automatically makes you a veteran.

Veterans provide our rights and freedom as U.S citizens. The veterans also offer medical aid, food, and water in other places around the world.

These places are usually in great disasters and no one opts to go there. We owe a debt of gratitude to these courageous men and women.

Do you say happy Veterans Day?

It is okay for you as a civilian to say happy Veterans Day. Well, this should reduce your troubles of coming up with something appropriate to say.

You are simply showing gratitude for the sacrifices they’ve made. Any form of thank you is acceptable; public or in person.

Armistice Day was the original name for Veterans Day. It was on the 11th of November 1919, which marked the first commemoration of the end of WW, I. The armistice was an agreement that ended the First World War.

The Armistice was a preliminary to peace negotiations. The negotiations began at 11 am on 11 November 1918. Armistice Day became a national holiday in 1938.

The name was changed to Veterans Day in 1954. Later, Congress passed the Uniform Holidays Bill in 1968, the Veterans Day changed to the Monday 4th October. The law was in use from 1971to 1975.

President Gerald Ford changed the date back to November 11. November 11 had a historical significance. Despite Veteran Day changing names and dates, it still and has always been for the remembrance of those who served the U.S in war.

Now Veterans Day honors and commemorates veterans of all wars. Hang your flags proudly on those porches.

Veterans Day is set aside to recognize and appreciate all living members of the military who served the United States in wars. On Veterans Day, the American flag hung at full-mast. It is full-mast since it is a day of celebration and not mourning.

There are usually parades and church services in celebration. Officially Veterans Day is observed on November 11 but the celebrations can be pushed to the weekend. Federal Government offices close on November 11.

Schools and non-governmental businesses may or may not close.

Ways Of Honoring` a Veteran

The sacrifices made by veterans should not be taken lightly. Take a moment of your time to show them gratitude and love. Many are the times that words can fail you but we all know actions speak louder than words.

Honoring those who served our country in war can be done in so many ways. Such simple gestures include:

Behind these veterans, there are families who also sacrifice a lot while their loved ones are in service. Luckily, veterans get to avoid the costs of senior medical care and even senior housing.

Types of veterans include:

Former active duty or reserve military personnel injured in the line of duty.

These veterans have been on active duty in another country. The wars are usually in an area of conflict and fighting a national enemy.

combat veterans have experienced combat involving an enemy. Combat veterans can either be active duty or reserved military members.

Medically retired members or those who have served a minimum of 20 years, whether in reserved or active duty.

There are so many benefits veterans get as a sign of gratitude for the services they offer. Some of the benefits and programs are given to veterans as a way of honoring them are:

Things You Shouldn’t Say To A Veteran

It is always a good day to thank a veteran for their service. But what are the right things to say? How do you avoid being awkward?

Being a veteran often means your life can change significantly and in ways, you hadn’t imagined. It is never right for you to give them your two cents about what they should or shouldn’t have done or anticipated; before, during, and after the war.

Finding the right words can be quite hard but this section will make things easy for you. Some of the things you should avoid saying to a veteran on Veterans Day are:

What flower is the symbol for Veterans Day?

The use of poppies as a symbol for Veterans Day was motivated by the World War I poem “In Flanders Fields.”

Why is Veteran Day celebrated on 11th November and at 11 am?

The 11th hour of the eleventh day of the eleventh month of the year 1918marked the end of WW I. This Day was originally Armistice Day before changing to Veterans Day in 1954. The Day now honors those who died in the war.

How many years is a veteran?

Anyone who has served for a minimum of 20 years is a veteran. They may or may not have been activated on a federal order. These veterans will be getting their retirement incentives.

A service member must have been 180 days of consecutive active duty or a Day in a combat zone.

A Certificate of Release or Discharge from Active Duty, DD214, allows you to apply for benefits and jobs. Not everyone with a DD214 is qualified to be a veteran.

You don’t have to have served during a war or been overseas to be a veteran.

What is the difference between Memorial Day and Veterans Day?

Veterans Day is a federal holiday that honors all veterans. It is usually celebrated on November 11.

Memorial Day on the other hand is marked on the last Monday of May. Memorial Day was conserved to pay tribute to fallen soldiers.

What president made Veterans Day a national holiday?

The 34th president of the United States, Dwight D. Eisenhower made Veterans Day a national holiday.

President Eisenhower, who was an American military officer, had signed a bill which was later passed by congress. The bill manifested November 11th as the national Veterans Day. This was in the year 1954.

Veterans Day preserves the historical significance of November 11th. This Day also aims at honoring the selfless, patriotic veterans who went to war for our country as well as others. Our daily lives are nothing compared to what veterans go through.

Many veterans experience hardship from Post-traumatic stress disorder. The veterans may have been at a young age at the time of the trauma. The countries and enemies they go to war with are among the factors that lead to PTSD in veterans.

Things that may trigger PTSD in a veteran may include sights, sounds, or smells that remind you of the traumatic event.

Why You Should Not Play Pubg : Top Reasons

Why Do Birds Fly In Front Of Cars? Things You Must Know 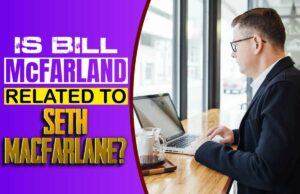 Lifestyle
Many people have assumed that Bill McFarland and Seth MacFarlane have a family tie. Despite having some resemblance, Seth and Bill are two very...

Why Do They Call It Hell’s Kitchen?