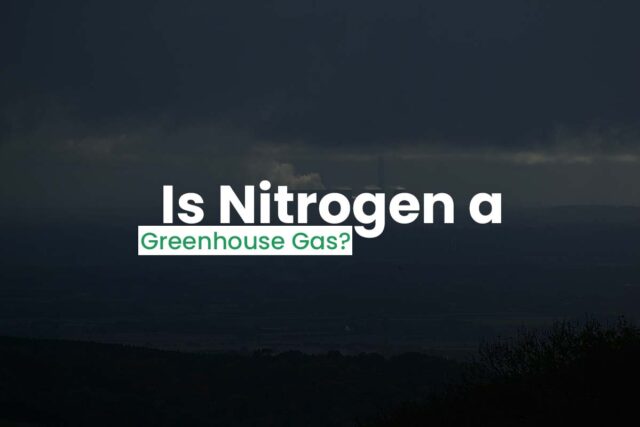 These are gases that absorb and release infrared radiation within the thermal infrared scope. They are abbreviated GHG.

This absorption and release of radiation reduce heat loss from the earth. This causes an increase in atmospheric temperature. This effect is what is referred to as the greenhouse effect.

Some common greenhouse gases include; nitrous oxide, ozone, water vapor and carbon dioxide. Some are naturally occurring while others are man-made due to pollution.

Back to our question

Is Nitrogen a greenhouse gas?

Greenhouse gases have 3 or more atoms. For instance, Carbon dioxide (CO2) has 3 atoms. Nitrogen (N2) has only 2 atoms and doesn’t qualify to be a greenhouse gas.

More About Greenhouse Gases And Their Effect

The most common greenhouse gas is Carbon dioxide (CO2). Its increased levels have caused a lot of concern in environmental organizations.

Other natural greenhouse gases such as Ozone are vital. They help keep the temperature on the earth’s surface at an acceptable level. Without them, the earth would be a lot colder at night.

Naturally, about 1/3 of the sun’s heat is reflected to space. The rest is absorbed by the Earth and water in oceans and seas.  This heat makes the Earth surface warm and it releases infrared radiation.

Greenhouse gases trap this infrared radiation. This warms up the atmosphere causing the greenhouse effect. This heat increase is mostly due to the vibration of particles.

The Infrared radiation hits a greenhouse gas molecule. This warms it and causes the molecule to vibrate. The vibration is transferred to every other particle close to the GHG molecule.

This continuous transfer of vibrations causes an increase in atmospheric temperature.

Nitrous Oxide is a product of the oxidation of Nitrogen gas. There are a lot of sources of Nitrous Oxide, most being human-made.

It is a by-product of fuel combustion. When fuels burn they heat the Nitrogen and get it to react with Oxygen.

This makes it oxidized and when it rises in the atmosphere it causes the greenhouse effect. We will explore most of the known sources of Nitrous Oxide.

Agriculture accounts for 67% of human Nitrous Oxide emissions. It produces both indirect and direct pollutions.

Direct pollutions come from fertilized soils and livestock manure. This happens due to the action of denitrifying bacteria. They convert the manure into Nitrogen which gets oxidized to Nitrous oxide.

Indirect emission comes from fertilizers. When there is the runoff of leaching fertilizers, oxidation of Nitrogen occurs and Nitrous Oxide is formed.

When fossil fuels burn, they cause heat to increase. This high temperatures cause the oxidation of Nitrogen in the surrounding air.

Some fossil fuels contain Nitrogen. When they burn it gets oxidized and producing Nitrous Oxide.

With the increased number of industries and fossil fuel vehicles today. There is a lot of emission of Nitrous Oxide. The effects are becoming more and more prevalent each year.

Biomass means living organisms such as plants. When living or dead vegetation gets burnt it causes Nitrogen in the air to get oxidized.

Humans release a lot of Nitrogen compounds into the atmosphere. These compounds get brought back to the ground by the wind, rain, or other environmental elements.

Once on the ground, they get acted upon by denitrifying microbial. The product released from this gets oxidized to form Nitrous Oxide. Which rises back to the atmosphere.

Human sewage also is a source of Nitrous Oxide. The sewage gets denitrified leading to Nitrogen’s oxidation. This accounts for a small percentage but it is not non-existent.

Melting of glaciers and ice caps

The increased temperature makes the surface warmer. These warm conditions cause the ice to melt which causes the deterioration of glaciers and ice caps.

This destroys the natural habitat of some species of animals such as polar bears. The loss of habit has reduced their population and they may even get extinct.

The temperature changes also cause animal migrations. Animals that are adapted to cold weather are forced to move. The warming climate doesn’t agree with their physiological biology.

Hurricanes can only form on waters above 26.510c. The greenhouse effect increases the atmospheric temperature which warms the water.

The increased temperatures may cause the death of plants. The plants dying would leave the ground barren.

Good land turns dry and impossible to use for farming or to plant anything. Food production is eventually crippled by these changes.

The increased temperature affects the growth time of plants. Some plants take longer to produce due to the changing climate.

This causes food shortages and water loss. The reclamation of such pieces of land is often expensive. Soil degradation has turned a lot of forests into deserts.

Flooding of islands and coastal cities

This happens due to the rise in sea levels. As the temperature increases, it melts the ice caps in the oceans.

The water resulting from the ice fills up the oceans. The water level will therefore increase. This would cause flooding of cities that are next to the oceans.

Small islands will also get consumed by the water. These events become more frequent and devastating as the levels of greenhouse gases increase in the atmosphere.

How Do We Reduce Greenhouse Gases?

This is one of the best ways to get rid of greenhouse gases. Renewable energy refers to using energy from the environment. This is the energy that will not emit any harmful substances into the environment.

Reusing will help reduce litter which may later produce greenhouse gases. In case you have an empty container, get some other use for it. This will mean that it won’t be thrown out. For those you can’t reuse, make sure you recycle.

Take back to a recycling bin or company. This will help keep the greenhouse gases at a manageable level.

Hybrids produce little emissions and they are much safer for the environment. Electric vehicles will be the best solution for this problem. They produce no emissions therefore the environment will stay safe.

Fossil fuels are massive producers of greenhouse gases. Cutting down on their use will be helpful. Avoid using charcoal or burning vegetation. Forest fires should be put out to prevent the mass production of these fumes.

This will reduce the electricity demand. The less electricity we use the less emission we cause.

Is Nitrogen a greenhouse gas?

What is the major source of Nitrous Oxide?

They produce both indirect and direct emissions. Direct emissions come from animal manure and fertile soils. This happens when they get denitrified.

Are there naturally occurring greenhouse gases?

Yes. Most of the greenhouse gases occur naturally. Some of the natural ones include Carbon dioxide, methane, water vapor, and Ozone. They protect us from UV radiation.

They are there to keep the earth surface warm enough to sustain life. At the right amount, they are completely harmless.

No, it is not. It is used in some medical practices. It is used to reduce anxiety and increase comfort during treatment.

It has a side effect. The users tend to laugh hysterically after use. This caused its other name, laughing gas.

Nitrogen gets oxidized from Nitrous oxide. Nitrous oxide is a greenhouse gas. It has extensive uses but its harmfulness to the environment can’t go unnoticed.

Smoking is Bad: Things That Smoking Destroys in Your Body

Can I Use Regular Lotion in A Tanning Bed? A Tiny Guide 10 Customer Needs Businesses Should Be Aware Of Business
Are you a new business owner or a well-established entrepreneur? Irrespective of your status, the success of any business is measured by your ability...

How To Select A Medical Practice You Actually Need?

Five Tips To Staying Healthy While Trying To Build And Advance...