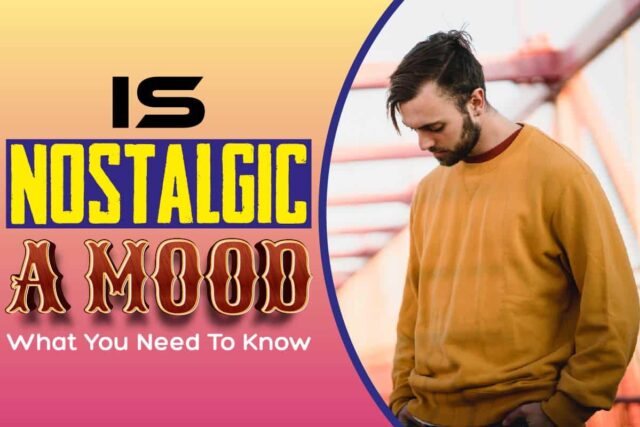 We all like to cherish good memories for the most beautiful reasons. It allows us to go back in time and relive our past lives. And sometimes, you would want to remain there, given the chance.

Now, can you remember the first time you rode your new bike around the backyard as a child? Again, think about those cherished moments you shared with your friends, or the pleasant aroma from your mum’s homemade cake.

Now, that’s what being nostalgic does. It takes you down memory lane. And, you can go far back to your first experience with Santa. But, how can you describe being nostalgic? Is it a mood? Or could it be something else? Let’s find some answers to the first question.

Is Nostalgic a Mood

No, being nostalgic is not a mood. Instead, it is an emotion. But that doesn’t change the fact that nostalgic memories can affect one’s mood. Being nostalgic can improve your mood. It can also put you in a low state.

It’s crucial to know that moods differ from emotions. Emotions are usually specific. For example, emotions can be attached to a place, person or experience.

A Mood, on the other hand, is less specific. It can be provoked by several things which you may be unable to identify. Again, moods tend to last for more extended periods compared to emotions. Moods can go on for hours or days. But emotions could last only for a while.

This post has more information on this topic. So, keep reading!

What You Should Know About Nostalgic Feeling

Nostalgia was first discovered in the late 17th century. At the time, soldiers abroad usually fell ill. The illness had symptoms like fatigue, irregular heartbeat, indigestion, fever and insomnia.

Johannes Hofer discovered the sickness resulted from longing and yearning for home. And then, the condition was called nostalgia by Swiss physician, Johannes Hofer.

The word came from the Greek words Nostos and Algos. Nostos means homecoming, while Algos refers to pain or longing.

At the time, nostalgia was a condition that described a neurological disease. And, it was a common belief that people could die from nostalgia.

However, by the early 20th century, the perception had a slight change. The neurological disorder didn’t describe the term anymore. Instead, professionals associated it with a mental condition. Which they said is similar to depression.

The Psychologists at the time speculated it to represent difficulties letting go of childhood. So, it was a belief that people who talk about their past could not move forward.

But in recent times, this has changed a lot. Current research relates nostalgia to mean an independent and positive emotion experienced by many people.

Psychologists describe the nostalgic feeling as a complex emotion. This is because it comprises both positive and negative feelings.

It usually comes with a fond memory that stimulates happiness. But often, nostalgic memories come with a sad feeling as well.

There are certain things you may never get to experience again. Realizing this could stimulate sad emotions.

So, a nostalgic feeling is a bittersweet feeling. It may include joy, loneliness, sadness or excitement etc.

However, nostalgia doesn’t always put people in a negative mood. Instead, it allows you to remember beautiful things. And also experiences you shared with people. So the positive elements outnumber the negative aspects.

Lastly, there are two types of nostalgia. They are restorative and reflective nostalgia. Restorative nostalgia is more of an inspirational force. It inspires you to go back and make a change in your past.

Reflective nostalgia is a lot different. This kind allows you to accept your memories as they are.

A nostalgic feeling is usually a happy and reflective one. It can make you feel good about your past.

Nostalgic feeling brings the good old days to your remembrance. You may have this feeling when you miss your childhood. Or your last prom experience. These thoughts usually come with positive emotions. And it could leave a lasting smile on your face.

You can experience nostalgia at any time. It affects both the young and old. Studies have also shown that children can have nostalgic feelings too. However, this can only be seen in children who are seven years and older.

Several other things can evoke a nostalgic feeling. Some of which are;

Is It Healthy To Feel Nostalgic

Negative feelings often trigger nostalgic emotions. However, it can increase your mood and positive emotions as well. This isn’t the only benefit of a nostalgic feel. It has been found to have social and psychological benefits.

Being nostalgic can be good for your well being. Studies have shown that it boosts your mood, social life and self-esteem. And makes you feel good about yourself.

Again, it gives you the strength to move forward and makes you hopeful about the future.

Furthermore, nostalgia motivates you to focus on growth-related behavior. It helps you focus on cultivating meaningful relationships and pursue essential life goals.

Nostalgia is also associated with making people feel youthful and vibrant. For example, when people get older, nostalgia gives them a lively feel.

Can Nostalgic Feeling Cause Depression

Nostalgic feelings come with lots of positivity. However, dwelling so much in the past can have a harmful effect as well. It may lead to needless anxiety and worry.

As earlier stated nostalgia is a mixture of positive and negative emotions. So, when you start worrying over things you can’t change, it becomes a problem. And it can cause a kind of depression called nostalgic depression.

However, nostalgic depression is yet to be classified as a mental disorder.

Nostalgic depression results from excess thinking about past events. It is that sad feeling you get when something triggers a memory from your past. It could be a song, a sound, or something you saw. So, how do you know if you’re experiencing nostalgic depression?

A sad state characterizes nostalgic depression. And a bittersweet feeling can describe it as well.

Most people use phrases like ‘I wish I could turn the hands of time’ quite a lot. Often, this may be because they feel regretful when specific memories flash back.

So, a nostalgic depression makes you regret certain things you did in the past. Often, this may result in dissatisfaction with the future. And it could cause fears regarding the future. It also causes a feeling of guilt over past occurrences.

Additionally, several people go into nostalgic depression after losing someone dear. Most people can’t forget the pain associated with losing a loved one.

How Can You Overcome Nostalgic Depression

Talk to a Friend:

Keeping your feelings to yourself is not healthy, most especially negative ones. Talking gives your thoughts a voice. And it takes so much weight off your shoulders.

It will help if you let negative feelings out. It is not a thing to struggle with on your own. Let someone know how you feel.

Speaking to a friend about how you feel can ease your anxiety and depression. Also, it allows people to support you.

Always Think About The Good Side:

There’s always a good to see in every bad. We don’t wish for bad things to happen. But, you can determine how it affects us.

Let’s take losing a loved one as an example. Losing a loved one is a terrible experience. However, focusing on the pain does no good. Instead, expose your mind to funny and lighthearted memories of them.

Speak To a Consultant:

Speaking to a professional can also help. However, this is preferable for severe conditions. But, if you feel a need to consult a professional, it’s an excellent decision.

Most professionals engage you with activities that can relax your mind. However, having a professional doesn’t guarantee complete healing. A combination of self-effort guarantees quick recovery.

Can I Feel Nostalgic For Something I Didn’t Experience

Yes, it is possible to feel nostalgic for an experience you’ve never had. Longing for something you didn’t own before can trigger this feeling.

For example, you could feel nostalgic over a dress you never wore. Or over the kind of home you never had. Most times, it is triggered by something similar to what you had. Some other time, it could result from the opposite of what you had.

Recent research provides a natural reason for this. The study explains that the brain system controlling familiarity and recognition are not the same. Further studies show that they are activated separately. But, both are found to work side by side.

This then makes it possible to long for something you haven’t seen or used before. Furthermore, it explains several other occurrences. Like, why do you forget certain places you’ve been. And also, it explains why you may recognize someone but forget where you met them.

Being nostalgic is not a mood. Instead, it’s an emotion. Moods are different from emotions. While emotions are usually specific, moods are less precise.

Nostalgic emotion comprises both positive and negative feelings. It is a bittersweet feeling which includes joy, loneliness, sadness or excitement etc.

However, nostalgia doesn’t always put people in a negative mood. Its positive elements outweigh the negative. And it reminds you of beautiful things and experiences.

Nostalgic memories may sometimes lead to excessive worrying over past events. And this may lead to a condition called nostalgic depression. 7 Vegetables To Eat When You’re Trying To Lose Weight Is Calvin Klein A Good Brand? What Fashionistas Should Know 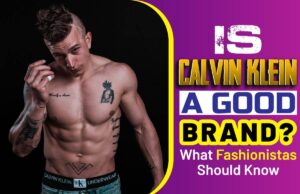 Business
The first impression that comes to mind whenever the name, “Calvin Klein” is mentioned is probably underwear. And with good reasons, the brand is...

Are Men Stronger Than Women? The Battle For Gender Supremacy

Benefits Of Omega-3s For Dogs- Should You Give Your Dog Omega-3...