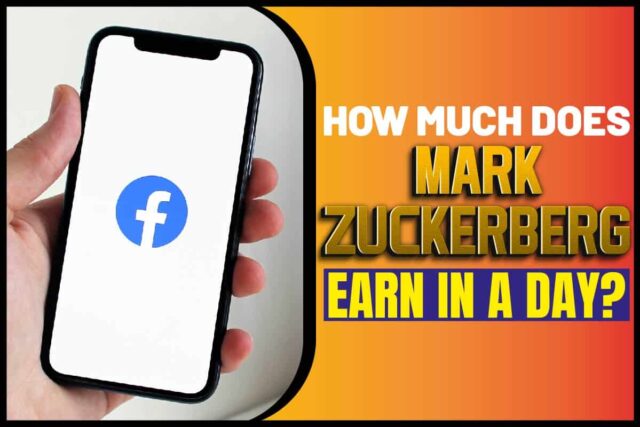 What is your guess on how much Mark Zuckerberg makes in a day? Mark Zuckerberg is the co-founder of Facebook and the youngest billionaire.  Now, Facebook has over one billion monthly active uses.

In recent years, it was challenging for people to keep in touch because of distance. However, thanks to Mark Zuckerberg, people can now communicate through Facebook despite the distance. Facebook’s earnings have made Mark Zuckerberg be among the top ten wealthiest people in the world.

How Much Does Mark Zuckerberg Earn Per Day?

Facebook’s earnings made him the second richest person in the world in May 2018. He had a net worth of around $74 billion, meaning he earned an average of approximately $6 million per day. However, as of July 2021, his net worth increased to $126 billion, making him reach around $34 million per day.

The parents of Mark hired a computer tutor to help nurture Zuckerberg skills once a week at their home. It helped Zuckerberg to keep up with his skills in computers. Later on, he joined Philips Exeter Academy in New Hampshire.

Zuckerberg was still fascinated with computers, and while in high school, he developed other new programs. He created a synapse program, an early version of the music media software for Mp3 playlists. The software analyzed users’ preferences and generated a playlist that guessed the tracks a user wants to hear.

The IT giants like Microsoft and AOL were fascinated about the software and gained interest in it. They even wanted to acquire it and offered Zuckerberg money, but he refused and ignored the offers. In 2002, Mark Zuckerberg graduated from Exeter Academy and joined Harvard University.

When he was in his second year, he gained a reputation as a software developer. He even created a program called CourseMatch during that time. It helped students at the campus to select their subjects depending on the Courses that other students had chosen.

Moreover, he also came up with the innovation of Facemash back in 2003. The idea came to him in his dormitory when struggling with Insomnia. He hacked Harvard’s database and created a randomly selected program, and compared pictures of two female students. It then allowed other students to vote who was hotter than the other.

The program became excessively popular, that the server crashed due to overload. The school administration found out about this and concluded that it was appropriate and hence punished Zuckerberg. Before the Facemash incident, three of Zuckerberg’s fellow students, ‘ Divya Narendra’ and twins ‘Cameroon’ and ‘Tyler Winklevoss,’ came to him with a proposal.

The proposal involved developing a website for social networking to help Harvard students suffering from emotional stiffness. The project was going to be called Harvard connection. Zuckerberg and agreed to do the project, and he joined them. During that time, he came up with his networking site, which is now known as Facebook. It even later forced Zuckerberg to drop out and focus more on it.

Before dropping out, Zuckerberg founded Facebook and allowed users to make their profiles, upload images, and converse. He did that with the help of his friends. On February 4, 2004, Mark registered Facebook as a company.  However, it only operated within Harvard.

Mark and his friends used to operate Facebook while still in school. They did so until Mark moved to Palo Alto, California, after dropping out in June 2004. When the year 2004 was about to end, Facebook gained one million users which paved the way to get more followers.

He looked for investments from different people to try and make Facebook more and more popular. Peter Thiel, the founder of PayPal, allocated $500,000. For more developments, they received another investment of $ 12.7 million from Accel Partners.

Zuckerberg made registration open to the public, and every educational institution in the USA accessed Facebook. In December 2005, the number of users who had joined Facebook was 5.5 million users. Facebook’s audience rapidly grew and even attracted users who were not students.

Large companies like Yahoo started approaching Zuckerberg when Facebook reached fifty million users. Yahoo offered Zuckerberg $900 million to sell them his Facebook project, but Zuckerberg rejected the offer. Instead, he expanded the site and made it accessible to even more outsiders, and he even added more new features. He even faced Lawsuits in 2006, but through perseverance, he won the battle.

In May 2012, Facebook was the most prominent internet IPO after raising $16 billion in its initial public offering. Mark Zuckerberg became the youngest CEO at 28 when Facebook made it into the fortune 500 lists for the first time.

The scandal of the 2016 election and Cambridge Analytica did not do much to hinder the company’s growth. Mark Zuckerberg cleared the air, and on 2018 July 6, Facebook recorded high stocks. It made Zuckerberg pass Warren Buffet and be the third richest person in the world at that time.

Microsoft bought an equity stake of 1.6% from Facebook that was worth $240 million. Before this event, Facebook never made an income of over 200 million in a year. However, after Microsoft acquired the 1.6% shares, the value of Facebook increased to $15 billion.

Bill gates created his Facebook account after the deal and used it to communicate with everyone. However, he closed temporarily closed his account because too many people wanted to talk to him. Through this act, Bill Gates made a significant PR Facebook campaign worldwide.

The Facebook co-founder used his exceptional strategy skills and acquired other companies. The companies that he bought were those working independently under Facebook’s umbrella. These companies included Instagram, Oculus Rift, and WhatsApp.

Initially, the ones who developed and owned Instagram were Mike Krieger and Kevin Systrom. In April 2012, Zuckerberg paid $1 billion in cash and stock to acquire Instagram. Before Zuckerberg purchased Instagram, it was only available for iOS users. However, now it is also available on Android OS.

Palmer Freeman Luckey was the one who headed Oculus Rift.  In March 2014, Facebook closed the deal of acquiring it for a total of $2 billion. It paid cash of $400 million and 23.1m Facebook shares. Moreover, it also paid $300 million as incentives if Oculus Rift reached a particular milestone in the coming years.

Mark paid a total of $22 billion to acquire Whatsapp in October 2014. Jan Koum and Brian Acton were the initial founders of WhatsApp. Facebook gave Jan and Brian cash of $4.59 billion and added 177,760,669 shares in the company.

Facebook generates a lot of money since millions of users worldwide use it. In 2013, it had $7.87 billion and $1.5 billion as turnover and net income, respectively. Within three years, the turnover was six times more than the original one.

Facebook’s primary source of earnings is contextual ads. It converts the increasing number of users and their spending time on Facebook into advertising revenues. About 85% of Facebook’s cash flow comes from contextual ads.

Most of the remaining 15% of the cash flow is deductions from purchasing virtual goods through the Facebook payment system.  In 2010 the company did an estimate, and it showed that the virtual goods made a global market turnover of $7 billion. The value recorded in 2010 increased by $8 billion in 2014.

There is also a simple way that Facebook generates its income. Facebook charges $1.00 to any user who sends private messages to users, not on their friend list. Moreover, there is an exclusive option where you pay $100 to send a message to Mark Zuckerberg and get into his inbox.

When Was Mark Zuckerberg Born, And Where Did He Live?

When Did Mark Zuckerberg Gained Interest In Computers?

At a tender age, Mark started gaining computer interest.  At twelve years, Mark developed a program for sending messages called “Zucknet” using Atari BASICS. The messaging program proved to be useful even at home. The whole family used to communicate with it within the house.

How Much Has Mark Zuckerberg Given For Charity?

Facebook has proved to be a successful innovation by Mark Zuckerberg as millions of people now use it. It generates many earnings, making Mark Zuckerberg be on the top ten list of the wealthiest people in the world. Despite the hurdles that Zuckerberg faced, he remained focused and ensured the success of Facebook. Now he earns millions of money per day. How Having A Pet Can Improve Your Mental Well-Being Lifestyle
If you're feeling down, stressed out, or anxious, you might want to consider getting a pet. Pets can play a huge role in improving...

What Businesses Should Learn About SEO To Increase Their Online Presence