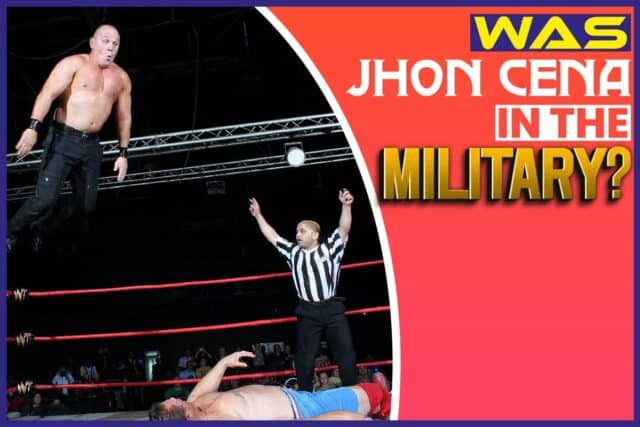 John Cena is among the greatest professional wrestlers in the 21st century. Apart from wrestling, he is also a rapper of American roots. Cena also has an eye-catching profile in Hollywood. After featuring in ‘the Marine’ movie, most people concluded that he was in the military.

Was John Cena In The Military?

John Cena decided to get into wrestling in 1999. Therefore, he went to California to train at Ultimate Pro Wrestling’s Ultimate University. Cena got his nickname ‘Prototype’ while at UPW because of his robotic movements.

In April 2000, Cena won his first UPW Heavyweight Championship. However, his reign as the champion did not last as he was defeated twenty-seven days after. In October 2000, Cena fought with Mikey Richardson in a dark WWF match and lost.

In June 2002, Cena had his debut o ‘smackdown’ where he fought with Kurt Angle. Although Cena lost with a small margin, he became the fan-favorite from that day. At that time, he even started performing freestyles about his opponents and developed a rapper character called ‘Doctor of Thuganomics.’

In October 2002, he partnered with Billy Kidman to challenge the tag team championship,  but they were unsuccessful. Later, he began feuding with the Undertaker and unsuccessfully tried to capture his first WWE title several times. However, despite not winning any title yet, he had still won the hearts of the fans.

In 2004, Cena was involved in feuds with the big show after the Big Show eliminated him in the Royal Rumble. The rivalry between the two led to Cena challenging the Big Show for his United States Championship. Cena won the match between him and the Big Show and took the US Championship.

Cena later had a vendetta between him and the Cabinet Crew, which Orlando Jordan was one of them. Therefore, Cena ended up losing his U.S. championship title to Jordan the same year. He then got into another feud with JBL in 2005, who was then the WWE Champion. After challenging JBL at WrestleMania 21, Cena won his first WWE World Championship title by winning it from JBL.

Later, JBL took the original belt claiming that he was the champion. However, the dispute got settled in a rematch where Cena won and retained his title.

Kurt Angle challenged Cena for the title and won it, but Cena retained it later. In 2006 he also lost his title to Edge, but again he won it in a Royal Rumble match. In 2007, he partnered with Shawn Michaels and took the World Tag Team Championship titles from Randy Orton and Edge.

In October 2007, Cena got a torn muscle injury that made him relinquish his title. After he recovered, he returned and had several unsuccessful attempts at capturing the WWE Championship title. In 2008 he teamed with Batista and won the Tag Team Championship.

Cena had a neck injury that required surgery and put him out of competing in the ring for some time. When he returned, he challenged Chris Jericho for the WWE World Heavyweight Championship. He claimed the title for the first time from Chris Jericho after defeating him.

He attempted severally to take the WWE championship from Randy Orton, but he was unsuccessful. In 2009 an ‘I quit match’ was arranged between Orton and Cena for the WWE Championship. He eventually won and took the title from Randy.

Cena continued losing and retaining WWE titles and become one of the greatest wrestlers in WWE. In 2009 he even got the Muhammed Ali Legacy Award for his exceptional achievements. Now, Cena makes surprising sporadic appearances in the WWE fights as he focuses more on his acting career.

John Cena has never had real-life military experience. However, the role he played in ‘The Marine’ movie influenced his wrestling character. Cena started wearing green camouflaged shorts and wore dog tags when coming to the ring. It, therefore, gave the impression that he was in the military.

Moreover, Cena started using a salute sign during his entrance to the ring. He then stated that it was a sign of respect to his fans and the men and women in the forces. The Army was his role model on how to be disciplined and adhere to the code of conduct.

Wrestlers Who Served In The Military

Over the years, the United States Air Forces and the World Wrestling Entertainment have had an admirable relationship. As a sign of respect, WWE company does an annual tribute to the troops to appreciate those who serve in the military.

Lacey Evans is an outstanding professional wrestler who has had several successes in the ring. Despite being in the industry for a few years, she has already featured in the pay-per-views. She is an exceptional character in the ring, and she is well known for her deadly right hand.

When Lacey Evans was nineteen years old, she joined the United States Marine Corp. She served as a military police officer for five years. She discovered pro wrestling in the military, and the rest is history.

Perry Saturn is among the few wrestlers who have had success in the ECW, WCW, and the WWE. Most people remember him as one of Raven’s Flock members in WCW. Moreover, in his storyline in the WWE, he fell in love with Moppy.

Perry Saturn’s toughness came from the military. He featured in the United States Army at seventeen years old. He went to study and graduated from U.S. Army Ranger School. Students there do intense leadership training for sixty-one days for those who do not know about Army Ranger School.

In the WWE industry, Randy Orton has forged his name to be one of the greatest names. He first featured in WWE back in 2000. From that time, Cena has gone to become one of the most successful wrestlers of his time. He has an impressive record of thirteen WWE World Championships. He has also featured in many pay-per-view events.

When Randy finished high school, he joined the United States Marine Corps, where he had a rough go. He did not have an impressive record since he disobeyed orders and had a couple of unauthorized absences. Therefore, his poor conduct led to his premature dismissal from the military, and he joined WWE.

Bobby Lashley is a professional wrestler and a martial artist, and he has had successes in both. Lashley has had many good fortunes in the WWE. He was the former United States Champion, two-time Intercontinental Champion, and now he is the Raw WWE World Champion.

Lashley was born in a military family since his father was a former U.S. Army Drill Sergeant. Lashley followed in his father’s steps, joined the Army, had a successful military time, and later joined the WWE.

Did John Cena participate in any other sport in his life?

After finishing his education, he joined Springfield college, where he joined an American football team. His muscular body allowed him to play American football perfectly. Moreover, His top-notch skills earned him the captain band, and he played in the central position. He was even the MVP of the team.

Did Cena acquire a degree?

Cena obtained a degree in exercise physiology and human anatomy in 1998 from Springfield college. He then went to pursue a bodybuilding career. Cena got a job in a Limousine company as a driver. Since he could not afford an apartment, he used to sleep in his 1991 Lincoln Continental.

When was Cena born, and where did he live?

John Cena Sr and Carol Cena had five children, and John Felix Anthony Cena was their second born. He was born on 23 April 1977, and his mother has an English Canadian origin, while his father has an Italian heritage. His parents raised him as a Catholic and attended Catholic Schools.

John Cena has had tremendous and successful wrestling and acting career in his life. He has won many awards, including the Mouhamed Ali Legacy award in 2019. Despite most people thinking Cena was in the military, Cena has never had real-time military experience. However, he has a strong bond with most of the members of the U.S. Military. Cena is now more focused on his acting career but has sporadic appearances in WWE. A Simple Guide – How To Make Your Garden Look Elegant... Lifestyle
When it comes to our gardens, many of us want them to look as elegant and private as possible. This can be a challenge,...

7 Things A Mom Should Never Feel Sorry About

How To Secure The Well-Being Of Yourself And Your Family

Are Men Stronger Than Women? The Battle For Gender Supremacy