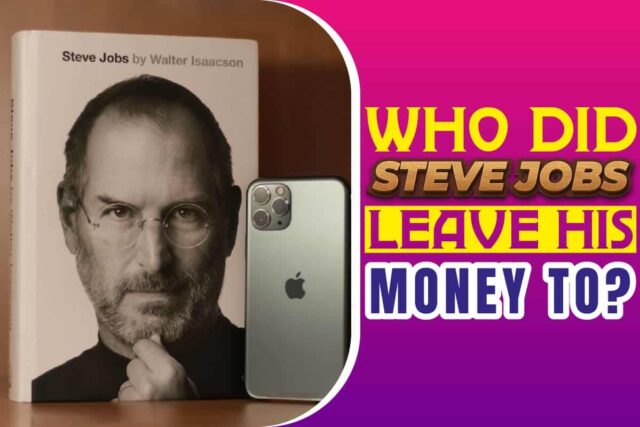 Most people know about Steve Jobs, but do you know who Steve Jobs left his money to? Steve Jobs met with an eighteen-year-old Stephen Wozniak, who was exceptional in electronics when he was thirteen. Their meeting led to the development of the Apple computer, which made Steve jobs among the wealthiest people in the world.

In 2011, when Steve Jobs died, he had a net worth of around $10.8 billion. Here is the story of Steve Jobs and to whom he left his money.

Who Did Steve Jobs Leave His Money To?

In 2003, Steve Jobs got diagnosed with pancreatic cancer. He later died on October 25, 2011, with a net worth of around $10 billion. The one who inherited a more significant part of his wealth was his wife, Laureen Powell Jobs. However, Jobs’ daughter from another woman, Lisa Brennan Jobs, had a share in the inheritance.

Steve Jobs And The Apple Story

In 1974, Wozniak was developing his computer logic board, and in 1976, Hewlett-Packard rejected Wozniak’s design. The upset pushed him to join Steve Jobs and get into business together. They sold Steve Jobs Volkswagen minibus and Wozniak’s programmable calculator to raise money to build Apple І. They made the Apple І at the Jobses family garage in 1976. Steve Jobs was about to turn 22 years in a month, and he would be a millionaire before his birthday.

The two sold the Apple І computers to independent computer dealers. At the same time, Wozniak had started working on Apple ІІ, a more powerful system, and completed it in 1977.  In 1978, Apple was making profits of around $2 million thanks to the development of Apple ІІ.

Apple’s success pushed the leaders to decide to make it public in December 1980. At the age of 25, Steve Jobs’s net worth increased to around $200 million. Apple’s success caught the attention of IBM PC, and they entered the personal computer market, becoming Apple’s biggest threat. At that time, Apple did not have a good reputation because of the flop of Apple ІІІ in 1980. Therefore, the hopes of Apple rested on the Lisa business computer project that started in 1978.

It was Steve jobs that named the business computer project Lisa In 1978, after his daughter’s name Lisa Brennan. Steve was a big believer in the Lisa computer. In 1979, he took a tour to the computer research lab Xerox PARC, and it made a significant impression on him.

He found out that the scientists there had made varieties of breakthrough technologies. The technologies included a graphical user interface (GUI)  and the mouse, ethernet, laser printing, and object-oriented programming. Jobs was mainly obsessed with GUI and hence insisted that Lisa should also use it.

The lack of experience and hot temper made Jobs not be on the same page with the Lisa leadership. Therefore he was thrown out of the project. As a form of revenge, he took over the Macintosh project and became the head of it in 1981.

The Macintosh had GUI and a mouse, and it became a smaller and cheaper version of the Lisa project. Later, Macintosh became insanely great, and the hopes of Apple rested on it after Lisa became a flop in 1983. The same year, Apple’s board of directors hired John Sculley as the new CEO of Apple. John Sculley supported Jobs’s mission of Macintosh.

In 1984, Steve Jobs launched Macintosh in public, and it was a success. However, in early 1985, the sales of Mac started to drop and caused tension between Jobs and the CEO. Later on, Sculley convinced the board of directors to kick Jobs out.

After Steve Jobs was ousted, he got involved in two big deals. The first one was in 1986, where he purchased a controlling stake in Pixar. Despite Pixar’s struggle, Jobs ensured its success through digital animation, leading to an initial public offering (IPO). It made Jobs earn around $1 billion, and that’s when he first became a billionaire.

The next deal he got involved in was founding NEXT that focused on creating high-end computers. Between the Pixar and NEXT deal, NEXT played a vital role in Jobs’s life. After Jobs got kicked out of Apple, the business struggled and incurred losses. The board of directors fired John Scully and appointed a new CEO, Gil Amelio.

Amelio did all he can to try and bring Apple to its glory days. He even chose to buy NeXTSTEP, NeXTs operating system and purchased the company for $400 million. The deal got made in December 1996, which saw Steve Jobs coming back to Apple, the company he founded. On September 16, 1997, Jobs got appointed as Apple’s interim CEO after Amelio got fired.

With Jobs in charge, he took drastic measures to try and turn Apple around as it was not in a good place. He used the NEXT operating system to create iMac, which was a success. He followed that up with the creation of the iPod in 2001 and the iPad in 2010.

Over the years, Apple dominated the smartphone market with iPhones. He also used iTunes to open up an e-commerce store and launched an Apple store. When Jobs stepped down as the CEO, Apple was among the biggest companies in the world.

The doctors found out that Steve Jobs had pancreatic cancer in 2003. He was to go through surgery but chose to use alternative approaches. However, in 2004 his condition worsened, and Jobs agreed to reconstructive surgery called Whipple operation. After a short recovery, he returned to managing Apple.

In 2008, speculations that his cancer was back were high because of his significant weight loss. In January 2009, he said that he was suffering from hormonal imbalance and would continue with his duties. However, after a few weeks, when he released that statement, he announced his absence to recover his health.

Reports came out in June 2009 that Jobs had a liver transplant, but it did not disclose if he had pancreatic cancer. Jobs ensured his health remained a private matter, and he did not reveal any more details. Before the end of June 2009, Jobs resumed his duties as had promised. However, In January 2011, he took another medical leave.

At this time, his health had reached a critical stage, and in August, he stepped down from being the CEO but became Chairman. After two months, he died peacefully at his home surrounded by his family. He died on October 25, the day following the introduction of the iPhone 4S.

Jobs Family And Their Relationship With Money

Jobs denied being the father of Lisa Brennan Jobs, who he got with his ex Chrisann Brennan. He even did a DNA test which came out as Job being the father of Lisa. After some years, their relationship became better and better, but still, there were money issues in their relationship. However, after Steve Jobs died, he made sure that he left Lisa with a multi-million dollar inheritance.

Laureen Powell Jobs, the wife of Steve Jobs, was the one who inherited the majority of Steve Jobs’s wealth. She even became the richest woman in technology and ranked number fifty-nine on ForbesForbes’s list of billionaires. None of her children had a share of Steve Jobs’s inheritance.

Laureen opposed the idea of wealth accumulation and hence announced that none of her children would inherit Jobs’s wealth. However, the children enjoyed the luxurious lifestyle. Laureen distributed the money to needy communities.

Did Steve Jobs Finish His College?

No. Steve Jobs did not finish college. In early 1974, Steve dropped out of Reed College. He got employed as a video game designer at Atari Corporation. He even went to India the same year to experience Buddhism. Steve Jobs returned to Silicon Valley, where he met with Steve Wozniak again in 1974.

Did Steve Jobs get Raised By His Biological Parents?

How Many Children Did Steve Jobs Have?

Steve jobs married his wife, Laureen Powell Jobs, in 1991. Steve Jobs had four children but had three with Laureen Powell and one from his previous relationship. Lisa Brennan, the offspring of a failed relationship of jobs and Chrisann Brennan, had an upbringing with a negative experience with Jobs.

At 23, Steve Jobs was already a millionaire and had a net worth of around $100 million at 25. Despite accumulating so much wealth, he did not focus on money at all. His main concern was loving what he did and what he invented regardless of the profits they brought.

He left his wealth to his wife and some to his daughter Lisa after his death in October 2011. The wife distributed the wealth to help those in need and did not give her children the wealth. The inheritance that his wife Laureen got made her be among the top 60 wealthiest people. What Are Surety Bonds And How Are They Useful Business
Surety bonds, a term that a majority of people haven’t heard of. So what does it represent? Namely, a surety bond can be defined...

When Do High School Reunions Happen? Things You Must Know

How To Keep Your Premises Safe And Prevent Personal Injury Lawsuits

7 Things You Might Need To Get Into The School Of...