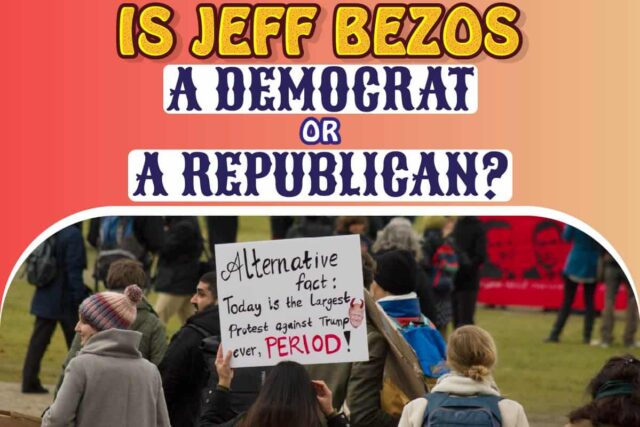 Jeff Bezos is one of the wealthiest people in the world and the founder of Amazon. He has gotten involved in the politics of the US through his donations. His actions have made people question whether he is a democrat or a Republican.

Despite people saying that Bezos is a democrat while others a Republican, he has maintained a reasonably nonpartisan stance. He donated to With Honor Action, which is a nonpartisan initiative. Moreover, Bezos has also given out money to Amazon’s political action committee, where the money goes to both parties.

The Democrats VS The Republicans

Despite America being a multi-party system, the Democratic and Republican parties are the most powerful ones. The Republican and Democratic parties both have different ideas. The two parties have dominated America’s political landscape, but they have greatly varied in their philosophies.

It is a party with liberal philosophy founded in 1824. It has a donkey-like symbol, and its color is blue. The famous presidents from the Democratic party included Franklin Roosevelt, John F Kennedy, Bill Clinton, Jimmy Carter, and Barrack Obama. The Democratic party has positioned itself to the left-leaning in regards to the economy and social matters.

The Democratic party believes in the philosophy of greater importance to equality and social responsibility. The democrats want the Government to have more impact on their roles and responsibilities to society. They believe that the more the Government involves itself with the community, the better the quality of people’s lives will be. Moreover, it will assist in bringing larger goals of opportunity and equality.

In addition, the Democrats favor environmental regulations and are against laws that discriminate against people for employment. The Democrats were also in favor of the food stamp program. They believed that most families could not provide for themselves due to high unemployment rates.

The Democrats opt to use more peaceful alternatives other than the military option. Hence they do not see any need to increase military spending. Moreover, the Democrats favor same-gender marriages and support abortion rights and keeping it legal. Many Democrats are against the death penalty and called for its abolishment in 2016.

The Republican Party is a party with a conservative philosophy founded in 1854. It has a symbol of an Elephant, and its color is red. The famous Republican presidents were Abraham Lincon, Teddy Roosevelt, Ronald Reagan, Richard Nixon, and George Bush. The chairperson of the Republican party is Ronna Romney McDaniel, who is a political strategist.

The Republicans do not believe more in social responsibility but rather individual responsibility. They lean more towards personal freedom and rights. Unlike the Democrats, Republicans see a Big government as an obstacle to the smooth running of things. They believe in a small Government where few people get employed in Government. Moreover, they favor a less active role and responsibilities of the Government in society.

The Republicans are against the environmental regulations and anti-discrimination laws for employment. They believe that such laws are not conducive to the growth of businesses and jobs. The Republicans demanded cuts to the food stamp programs as they argued there is a lot of fraud there.

When it comes to the military, the Republicans want an increase in military spending. Moreover, they also desire the Government to deploy military options more often against countries like Iran. Republicans also support the right to bear arms and carry concealed weapons.

The Republicans are against abortion rights and want it to be made illegal. Moreover, they are also against same-gender marriage as they believe marriage should only be between a man and a woman. Most Republicans also want the death penalty to be made legal in America.

Despite the two parties having different views on different subjects, they are vital in American politics. None is inferior to the other. Anyone has a choice to become either a democrat or a republican without facing any discrimination or judging.

Bezos Support For Both Parties

In 2010, most people believed that Jeff Bezos was a republican after what he did. He donated $100,000 to help bring down the measure set to impose an income tax on the super-wealthy people. He did that probably because he was one of the top earners in the state.

However, In 2012, Bezos did something else in American politics that made people think he was a Democrat. He donated a large amount of $2.5 million to Washington United for Marriage. It was to campaign for legalizing same-gender marriage in the state.

Moreover, Bezos has made donations to the Amazon Political Action Committee. The work of Amazon’s PAC is to collect donations from its employees and distributing the money around to different political candidates. They have distributed cash to democrats, republicans, and nonpartisan candidates.

One of the most significant donations Bezos made was $10 million to the With Honor Action. With Honor Action works to ensure Veterans get elected in the office. Their main objective is to provide a less divided political climate in America through leaders who have made the most considerable sacrifices.

Things To Know About The Politics Of Jeff Bezos

Bezos parents were big supporters of charter schools. In a 2004 referendum, Bezos supported charter schools by donating $100,000. Moreover, in 2010, his mother and stepfather donated $1 million to support an education initiative. The initiative would have allowed Washington state to open up to 40 charter schools. Luckily, it narrowly passed.

Nick Hanauer, an early Amazon investor, described Bezos as a libertarian. He described Bezos as someone who believed that liberty is the most important political value. Bezos had a belief that people had the right to make their choices. They can do what they want with their bodies and properties. It is the main reason why he supported same-gender marriage and abortion rights.

It is almost impossible to talk about American politics and fail to hear the name of former president Donal Trump. When you talk about Jeff Bezos and his involvement in politics, it is unavoidable also to Involve Donald Trump. In 2016, Trump sent Bezos an invite to join the Defense Innovation Advisory Board, but Bezos rejected it.

He even tried to persuade the postmaster general to increase rates on shipping Amazon goods. Despite Bezos not being a Trump fan and Trump trying hard to bait him into reacting, Bezos remained calm. The feud went on until one time it reached the courts. Amazon claimed that Trump used his power to give the cloud computing contract worth $10 billion to Microsoft over Amazon.

What Is The Personality Type Is Jeff Bezos?

How much are Jeff Bezo’s donations?

Jeff Bezos is among the wealthiest people in the world. He has used his money to make various donations over the years.  Bezos donated $10 million to the History and Industry Museum in Seattle. He also donated  $15 million to Princeton Neuroscience Institute to create a center studying neurological disorders.

Who Is Jeff Bezos?

Jeff Bezos is among the wealthiest men globally, with a net worth of $207.7 billion as of 2021. Over the years, Jeff Bezos has involved himself in politics through the donations he makes. His contributions have made people wonder whether he is a republican or a democrat.

Jeff Bezos donations have demonstrated that he is neither a democrat nor a republican. However, most of his views have sided with those of the democrats. Moreover, he has donated more money to the Democrats than Republicans.  When he had a feud with Donal Trump, the way he handled himself showed he had great control over what is around him. Questions
Normally, nails grow at about three millimeters per month for adults. Some people may find that their nails are growing faster than usual.  This is...

7 Things You Might Need To Get Into The School Of...

Driving In The Mountains For The First Time? 9 Tips To...

Smart Ways To Buy Comfortable & Beautiful Cushions For Your House