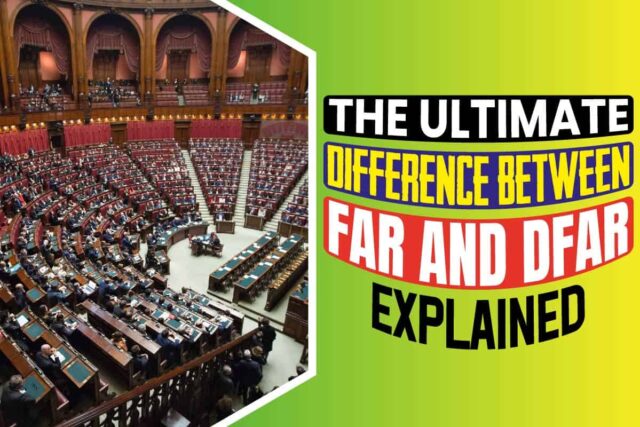 Rules are necessary to keep every sector of the economy in check, and the U.S. government doesn’t miss a beat. FAR and DFAR are responsible for keeping government contractors in check.

Government contractors need to know the federal acquisition regulations (Far) because they would need the knowledge when they bid for a contract.

So, let’s answer the question.

Difference between FAR and DFAR

DFARS means Defense Federal Acquisition Regulation Supplement. DFARS is the same as FAR, except it is precisely for defense agencies. If a contractor or vendor wants to work with a defense agency, they would have to use DFAR with FAR.

The federal acquisition regulation is a set of rules that keep the United State’s procurement practices in check. The FAR monitors the contracts issued by the different agencies in the United States government, from civilian agencies to the military to NASA.

When it comes to acquisitions, the procurement process and contracts, the FAR is the governing set of rules for the government and the public. The regulations of Far are a law to all.

As a government contractor or a potential contractor, you should have in-depth knowledge of the FAR. You need to know what their regulations are and the limits they placed on the government authorities.

To utilize the FAR properly, you need to understand its arrangement. FAR is in Subchapters (A-H). Each subchapter has 53 Parts. The FAR has two volumes.

Volume 1 consists of Subchapters A-G while volume 2 has only one Subchapter, H.

Part 52, which contains standard solicitation provisions and contract clauses, is the most extensive section of the FAR. Part 52 is essential reading because it outlines the requirements to get certified, instructions and pointers you must follow for specific contracts. Below are the different types of clauses and provisions:

These clauses are crucial and have to be in the contract. If one or two provisions get left out for some reason, it will still be legally binding in the agreement.

Subchapter D, which describes the various socioeconomic programs, is another section that may be of interest to you. This subchapter consists of rules for labor laws, small business programs, purchasing foreign sources, and other topics.

The forty-fifth part of the FAR should be part of your research because it outlines the rules for your responsibilities as a contractor as well as the government’s remedies if you fail to meet those responsibilities.

The agency is in charge of providing all acquisition regulations, including supplemental rules that place additional restrictions or requirements on contractors and officers involved in the contracting process.

The Far may say they lack the authority to issue such extra regulations when there is an emergency. A typical example of a supplement is the Defense Federal Acquisition Regulation Supplement (DFARS).

To find the guiding principles and visions of the federal acquisition systems, you must go to part 1 of FAR. Part 1 is an encompassing discussion on the visions and principles of FAR.

The vision insists on the fast and punctual delivery of value of both products and services. This prompt delivery gets done while building and keeping public trust.

Every member of the Acquisition team has to comply with the rules and regulations to the latter. There is no room for following one law and not following the other. They must also learn to take the initiative for the government when it comes to areas not included in the FAR.

The Acquisition Team consists of any person that has anything to do with acquisitions in government. The procurement and supply groups, the customers they offer the service too and the contractors who carry out deliveries.

RAR 1.102-4 and FAR 1.102-3 talk about the procurement team of the government, their operation, and roles. The system created by Far promotes open communication, collaboration, and a united purpose.

Deviations From The FAR

The FAR 12.401 makes provisions for a commercial item contract to get fashioned in a specified manner that follows the clause.

For far deviations, you should also look at Technical Data; FAR 12.212, FAR 12.211, Computer Software; FAR 12.213, and Other Practices for extra authority to deviate from FAR provisions and clauses for commercial services and items.

The DFARS should always be together with the FAR. DFARS isn’t independent of FAR.

There are also 53 parts to the DFARS, and as a contractor, the following sections will be most beneficial to understand:

Of the 53 parts of the DFARS, 206 is one of the most important for you to know. Here is what it says:

(b) Contracts awarded to individuals using the procedures outlined in 237.104(b)(ii) are exempt from the FAR Part 6 competition requirements, as authorized by 10 U.S.C. 1091.

(S-70) Follow-on production contracts for products developed under the “other transactions” authority of 10 U.S.C. 2371 for prototype projects are also exempt from this section if—

(1) The other transaction agreement contains provisions for a subsequent production contract.

(2) The officer in charge of contracts gets enough information from the project officers, the agreement representative and documents that the situations outlined in the note- 10 U.S.C. 2371, subsections (f)(2)(A) and (B) (see 32 CFR 3.9(d))got fulfilled; and

(3) For the other production. Follow up, the officer in charge of contracts creates prices and quantities that can be less but not more than the price conclusions made in the transaction agreement.

(a) Agencies may use this authority to exclude a specific source entirely or partially from a contract action.

(b) The determining, finding and supporting documentation must unveil the source that gets removed from the contract. The other documentation consists of the information at PGI 206.202(b), as used. As well as any additional relevant information

These explain what 207 and its subdivisions says.

(a)(1) When using FAR Part 12 procedures, see 212.102 for the requirements for a written determination that the commercial item definition was fulfilled.

(A) Development acquisitions, as defined in FAR 35.001, when the total cost of all contracts for the acquisition program is estimated to be $10 million or more;

(C) Any other acquisition deemed necessary by the department or agency.

(ii) Written plans are not required in a final buyout or one-time buy acquisitions. The terms “final buy out” and “one-time buy” refer to a single contract that addresses all known present and future needs. This exception does not apply to multiyear contracts, contracts with options, or contracts with phases.

(g) The program manager or other official in charge of the program is ultimately responsible for acquisition planning.

This post is an overview of the difference between far and DFAR, their structure and parts. You’ll also get to know how both groups operate from this post. How Is An Industrial Electrician’s Salary Calculated? 6 Things You Should Do To Avoid Being Hacked In 2022 Tech
Keep Your Online Life And Your Digital Assets Safe From Hackers   There is no way to avoid having your sensitive personal information stored online in...

What Is A Home Warranty And Can It Really Save You...

3 Things You Should Know About Property Management