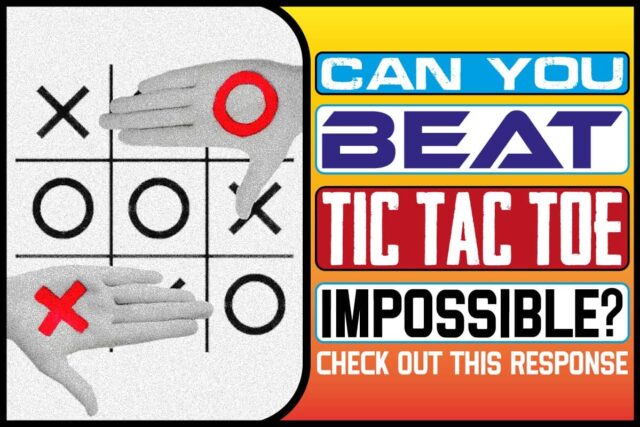 The puzzle game Tic Tac Toe is a two-player game in which each player takes turns to mark spaces in a 3×3 grid. The winner becomes the winner who first achieves three marks in a vertical, horizontal, or diagonal row.

Tic Tac Toe Impossible is Google’s adaptation of the puzzle game you play against the computer. People have wondered about the choice of the name “Impossible.” For some, it is a ploy to attract interest, while others opine that it is a game where one can never win.

Game developers can write a game in which the computer cannot lose. The downside is that players get bored easily after several attempts to beat the computer.

As a solution, developers can include certain tactical loopholes to ensure that players can beat the computer occasionally.

Google, however, claims that you cannot beat Tic Tac Toe Impossible. So far, no player has claimed to have done so.

Tic Tac Toe Impossible is one adaptation of the game. Traditionally, Tic Tac Toe is a pencil-and-paper game. You can also make elaborate forms of the game, using cardboard or even a wood board.

Keep reading to learn more about this highly-rated puzzle game.

How To Make Your Own Tic Tac Toe Puzzle Game

With a few items, you can make your own Tic Tac Toe board game. You can use enlarged cardboard paper if you want to make a long trip to keep your kids busy.

To make your Tic Tac Toe, you will need the following items: scissors, white paint, small pebbles, a permanent marker pen, and a piece of fabric to make the storage bag. Alternatively, you can also use a small container for storage.

Follow the steps below to make your Tic Tac Toe Game.

Tic Tac Toe is simple to make and play. Apart from the excitement of winning the game, there are other benefits of playing the game.

Tic Tac Toe is a game of strategy that requires the application of logic and reasoning. The benefits of the game include:

History Of The Tic Tac Game

Three-in-a-row board games were popular in Egypt in 1300 BC, with many drawings of such games found on roofing tiles.

The earliest know variation of the Tic Tac Game dates back to the first century BC in Rome. Chalk markings of this game have also been found in many places in Rome.

The Roman version of the game was known then as lapilli (meaning three pebbles at once). Here, players had only three pebbles to play with, leaving more empty spaces to move around.

Another ancient simulation of the Tic Tac Toe puzzle game is the Picaria game, popular among the South-western United States Pueblo people.

The earliest modern reference to the game is the “noughts and crosses” – linked with the British people. This name first appeared in an 1858 issue of a scholarly journal, Notes & Queries.

The word, “tic-tac-toe” first appeared in print in 1884 to reference a children’s slate game. The current name – Tic Tac Toe – became the standard in the US at the turn of the 20th century.

The game developed for the University of Cambridge’s EDSAC computer could play perfectly against human opponents.

Then in 1975, MIT students used the Tic Tac Toe to illustrate the computing power of Tinkertoy elements. The Tinkertoy computer, currently on display at the Boston Museum, can also play Tic Tac Toe perfectly against a human player.

A perfect game of Tic Tac Toe means you either win or draw. Newell and Simon published a tic-tac-toe program in 1972 that outlined a perfect game strategy for Tic Tac Toe.

When it is your turn to play, choose the first moves from the situations below to play a perfect game.

Many variations of the Tic Tac Toe have evolved over the years to enhance the appeal of the ancient puzzle game. Let us consider a few of them.

Qubic is a trading name for the 3D tic-tac-toe, a two-player strategy board game. The concept is similar to the traditional Tic Tac Toe. The difference is that the cells in Qubic have a cubical arrangement of 4×4×4.

You can play Qubic using pencil and paper. You can also make your own game with cardboard paper using the method earlier described.

Video game implementation of the Qubic game is currently available on Xbox. Microsoft has also developed a version for its Game Room platform.

Number Scrabble is a grid-like isomorph of Tic Tac Toe. In this game, players select numbers 1-9 in turns without repeating a previous selection. The first player to achieve a total sum of 15 wins the game. This goal is the reason why players also refer to the game as Pick 15.

Nokakto is a variation of Tic Tac Toe that combines Tic Tac Toe and Nim gameplays elements. Nim is a two-player mathematical game where each player removes objects from heaps.

The goal of Nim is to avoid picking up the last object. The combination of Tic Tac Toe and Nim provides the basis for the Nokakto variant. Players can play Nokakto across one or more boards using the same piece or cross.

The game ends when all the boards have a three-in-row arrangement of that piece. The losing player is the one who made the last move before that point in the game.

In wild tic-tac-toe, players can choose to place any of the markers in each move. This gameplay is slightly different from the traditional concept where you can only use one type of marker.

You can play the wild tic-tac-toe on a three-by-three board. You and your opponent can play either of the tiles in turns—the first to have three-in-a-row win the game.

Other variations include the three and nine men’s Morris, Gomoku, Pente, and Mojo.

Tic Tac Toe is a two-player puzzle game in which each player takes turns to mark the spaces in a 3×3 grid.

The winner becomes the winner who first achieves three marks in a vertical, horizontal, or diagonal row.

Tic Tac Toe Impossible is Google’s adaptation of the puzzle game you play against the computer.

You can master the complete game strategy, but you cannot beat Tic Tac Toe Impossible. The best result you can achieve is a draw.

The developers programmed the computer to play perfectly against human opponents in Tic Tac Toe Impossible. What Is Warehouse Management And Why It’s Important Business
In today’s world of fast-paced economy, it is essential to achieve high efficiency in managing your products. The market is demanding and there has...

How Can Beginner Programmers Better Manage Their Workflow

Are Spore Servers Still Up? A Must-Play Game