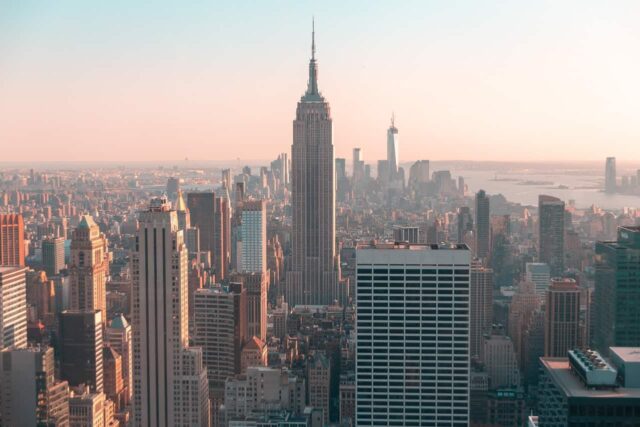 One of the most iconic skyscrapers not only in NYC but entire world, Empire State Building provides fantastic views of the city from its top. You can get to the top by elevator or by walking up the steps. If the latter sounds more exiting, you’re probably wondering how many steps does it take to reach the top of the Empire State Building. The answer might shock you – it’s nearly two thousand!

How Many Steps Does It Take to Reach the Top of the Empire State Building?

Actually, if you want a precise answer to the question of how many steps does it take to reach the top of the Empire State Building, the exact number is 1,860 steps. It surely sounds a lot, but this can’t surprise you if you know that this is one of the tallest structures in New York.

How Many Floors the Empire State Building Have?

And if you manage to take thousands of steps to reach the top of the Empire State Building, you will surely be rewarded for your effort. The thing is that this structure provides fantastic views of the city, thanks not only to its height, but also its location. Speaking of the location, the Empire State Building is situated in the very heart of the city in Midtown Manhattan, where it was built in the 1931.

For nearly four decades, Empire State Building was the tallest structure in New York City. But, that’s no longer the case. Actually, as of 2019, there are three other skyscrapers that are taller than 1,250 feet (380 m), which is the roof height of the Empire State Building.

If you thought that climbing the stairs of the Empire State Building would be a big challenge, what would you say if I told you there are three other NYC skyscrapers that are even taller? Let’s talk about those three!

Part of the much anticipated Hudson Yards development project is in Manhattan’s West Side, 30 Hudson Yards, or the North Tower, is nearing its completion in 2019. The 90-story office tower, with future tenants like Time Warner and Wells Fargo Securities, will be the highest building at Hudson Yards. It’ll also be the second tallest office building in New York City. The building will have features like outdoor terraces, a triple-height lobby, and LEED Gold-certified status.

Of interest to visitors is the over-the-top observation deck. Currently under construction, it will be the highest outdoor observation deck in the western hemisphere. At more than 1,000 feet tall, it is slated to have a 10,000-square-foot restaurant, bar, and event space. Perched on the 100th floor and jutting out 65 feet over the building’s side, the wow-factor observatory is scheduled to open in late 2019.

So, how many steps does it take to reach the top of 30 Hudson Yards? It’s still not official, considering that the building is yet unfinished, but the developer says there gonna be more than 2,500 stairs.

While New York City is soaring with skyscrapers, it takes a lot to stand out. That says a lot about 432 Park Avenue or the “Matchstick Building”, as the locals and the media call it. This is a slender supertower of 1,396 feet, tall enough to overtake many other skyscrapers in the western hemisphere.

This megatower was built for private residences and offers 104 luxury apartment houses. Its features include oversized windows and views to-die-for of Manhattan and Central Park.

Its tenants have numerous luxuries at their disposal, including an exclusive restaurant, private swimming pool, spa and fitness facilities are just a few of them. However, as expected, all of those conveniences are accessible only to the ones that live there and their visitors. So, if you want to check this building up, you’d better save up or have prosperous buddies.

So, how many steps does it take to reach the top of the Matchstick Building? Same as 30 Hudson Yards, this skyscraper also has 2,500 steps.

Also known as “Freedom Tower”, One World Trade Center is valued at $3.9 billion for its 104 stories and 1,776 feet – the height that symbolizes the year of the signing the U.S Declaration of Independence.  Its rooftop is the highest point in the City of New York and also the western half of the world.

It is definitely a notable sight that defines the lower parts of Manhattan’s horizon – the central, soaring building within the World Trade Center, a complex still under construction. To remind of its precursors, the collapsed Twin towers, its roof stands at 1,368 feet above ground and, like the initial WTC North Tower, the footprint marks every 200 feet. The difference to 1,776 feet is made up by the 408-foot steeple – with apparatus for communication and a projector for a ray flare in the sky, at night.

It is used as a building for offices ( and has residents such as Condé Nast), but the One World Observatory viewing deck is open to the public – it opened in 2015 and still is the topmost one in the City of New York. With a distinguished lounge situated as high as 1,250 feet, a confined landmark with three floors -100,101, 102 – has high-tech tricked-out displays that you can interact with, a terrace to view the broad scenes over the City of New York and even New Your Harbor, and also offers the possibility to have a meal there.

So, how many steps does it take to reach the top of One World Trade Center? The exact number is 2,226 steps.

How Tall are the Tallest Structures on the Planet?

One World Trade Center, the tallest building in the US is not even among the top 5 tallest skyscrapers in the world. Actually, it’s currently the number 7. If you’re wondering which buildings are taller, below are the top 3.

No.3 Tallest Building in the World – Shanghai Tower

As its name suggests, the building is located in China. Shanghai Tower has the topmost observation deck inside a construction, situated at 562 meters, and also the second-fastest escalators in the world with a speed of 20.5 m/s, or 74 km/h, 46mph.

So, how many steps does it take to reach the top of Shanghai Tower? 3,398!

No.2 Tallest Building in the World – Wuhan Greenland Center

Located in China, this superstructure is not finished yet. The work was put on pause in the August of 2017, with the 96th floor. Because of airspace requirements, it has to be adjusted in a way it does not surpass the 500 meters limit about the level of the sea.

Also, a different Chinese project – the Ping An Center of Finance – had to be downsized for the same regulations. When it will be completed, it will have the title of the 2nd worldwide, and the first in China, regarding height.

So, how many steps does it take to reach the top of Wuhan Greenland Center? The building is not yet finished, hence no one yet has the right answer, but it’s speculated it will have about 3,500 steps in total.

No.1 Tallest Building in the World – Burj Khalifa

Totaling 2,227 feet (829.8 meters) of height, with the roof situated at 2,217 feet high (828 meters), without the spire, the Burj Khalifa has been the tallest construction worldwide since 2009. It was created as an extensive focal point of a multipurpose use complex, housing 30,000 apartments, nine hotels, 3 hectares (7.4 acres) of land occupied by parks, about 19 private skyscrapers, the Dubai Mall and even 12 hectares (30 acres) of the man-made Burj Khalifa Lake.

The building of such a complex was made after the official’s conclusion to switch from an economy based only on oil-trade to an economy with a tourism side. As the government stated, it was of utmost importance to have developments like this one so that they might gain more foreign recognition, and, ultimately, more investments made.

The mastermind behind this project is Adrian Smith, who didn’t feel like the top part of the establishment rounds off in an elegant way in accordance with the whole project. Therefore, he looked for ways to top up its height and got authorization for this. However, no other floors were to be added, which was perfect for the plan Smith had in mind – to add slenderness to the crown of the building.

So, how many steps does it take to reach the top of Burj Khalifa? The exact number is 2,909 steps to the final habitable floor, above which the spike that makes Burj Khalifa the tallest structure on the planet.

Why Does Maldives Beach Glow at Night? Why Does Copying Take So Long On PS4? PS4 File Management Questions
Gaming is a popular entertainment option for people globally, and companies that create gaming consoles make millions from them.  Standard consoles include the PlayStation and...

How To Defend Your Rights After Being Injured At Work