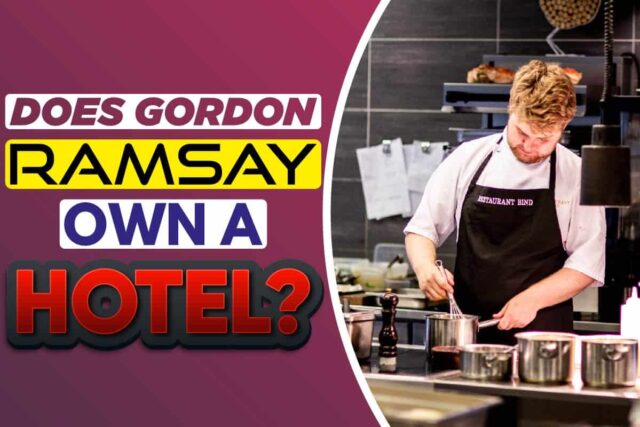 Gordon Ramsay is a celebrity with multiple shows. He has vast experience in the kitchen hence ended up becoming a chef. However, the aspiration Ramsay had when young was to become a footballer. He did not fulfill this dream because of an injury that he got.

He has become a successful chef over the years and has had many awards and achievements. Most people ask if Gordon Ramsay owns his hotel. You would get to know more about Gordon Ramsay and get the answer to your question if he had a hotel or not.

Does Gordon Ramsay Own A Hotel?

Yes, he does have a hotel. Gordon Ramsay owns a small hotel in London called York and Albany. He opened the hotel in 2008, and since then, it has been offering hotel, restaurant, a bar, and Deli services. He has the skills of operating and managing a hotel since he has a degree in hotel management.

York an Albany hotel is a well-known hotel located in London that belongs to Gordon Ramsay. In the early 19th century, York and Albany’s hotel was John Nash’s townhouse. It got built by Russell Sage, a British fashion designer.  The hotel offers a hotel, restaurant, bar, and Deli services.

The public rooms of York and Albany hotel have decorations of contemporary vintage pieces like leather sofas. The rooms have high ceilings and enormous windows. The hotel has nine rooms with carpeted stairs to take you there.

It has a restaurant split across two levels. There is a narrow door at the back of the restaurant’s ground floor that will take you to the hotel. The appearance of the hotel is stylish and pleasing to the eye.

One of the critical factors for a hotel to be successful is high-quality services. Gordon Ramsay knew this and hence ensured his hotel gave first-class services to its customers. York and Albany offer friendly and informal services yet remaining professional. It provides various services like a bar, laundry, WIFI, restaurant, and room service under one roof, making it convenient for customers.

In the rooms, there are spacious bathrooms with underfloor heating. It also has marble tiles, bathtub, and shower combinations. Gordon ensured that the rooms were state of the art to ensure customers had the time of their life.

When it came to food and drinks, Gordon was the specialist. Gordon Ramsay himself ensured that the food and drinks at York and Albany were first class. The hotel had an astonishing ground floor dining area and basement. They provided a food menu of moreish mixed nuts, beer-battered fish and chips, Cashew butter chicken curry, etc.

The astonishing thing about York and Albany is that they considered guests with disabilities in their plans. They provided lifts to take those with disabilities to the upper floors. There are also rooms with walk-in showers suitable for the accessibility of wheelchairs. Moreover, there are also support handles in the bathroom and an emergency cord.

The skills that Gordon Ramsay has had in Hotel Management have made him excellently manage his restaurants. Almost all of his hotels and restaurants are state of the art, and the food is finger-licking sweet.

Gordon James Ramsay and Helen Cosgrove, a nurse, brought Gordon Ramsay to the world in October 1966 in Scotland. When Gordon was five, his parents raised him in Stratford upon Avon, England. When Ramsay was young, he dreamt of playing football, and therefore he focused more on the football profession.

At 15, Ramsay even joined the Glasgow Rangers club to fulfill his dreams. In 1985, his vision came to an end when he had a knee injury. It forced him to end his aspirations of becoming a professional footballer and start all over again.

Therefore, he returned to school, worked hard, and earned a degree in Hotel Management in 1987 from North Oxon College. After Ramsay finished his studies, he moved to London and set himself under the direction of some of the best chefs in Europe. When he was under Chef Marco Pierre White, Ramsay sharpened his cooking skills and got employed as an apprentice at Harvey restaurant.

He also worked under Chef Albert Roux at Le Gavroche. In the1990s, in France, he worked under the guidance of master Chefs Joel Robuchon and Guy Savoy.  Ramsay became the head Chef of Aubergine when he returned to London in 1993.

Gordon made Aubergine win a two-star rating from Michelin in three years. More personal prestige followed him, and he even won the ‘Newcomer of the Year at the Prestigious Catey’ Award. Later on, Gordon was out of Aubergine and opened ‘Restaurant Gordon Ramsay,’ which won a Michelin three-star.

Gordon Ramsay has remained focused and dedicated that he even opened more other restaurants. He opened ‘Petrus’ and a second ‘Gordon Ramsay’ in London. Later, he then opened ‘Verre’ in Dubai. By 2006, Ramsay won the ‘Chef of the Year’ award and the ‘Independent restaurateur of the Year.’ Ramsay relocated his restaurant enterprise to the US, and he has ever since expanded his restaurant business around the globe. In 2013, Ramsay was a culinary wall of Famer.

Problems With York And Albany Hotel

Since Gordon Ramsay opened his state-of-the-art York and Albany hotel, it has been at the top until 2015. Even the best faces problems and challenges in their path to success. In 2015, a lot of people started complaining about the hotel.

In the ‘Ramsay Kitchen Nightmares,’ Ramsay dedicated himself to turning failing restaurants into successful ones. However, in 2015, he had a taste of his own medicine and had to do something to save his hotel. Most people started complaining about the negligence of the rooms. Customers complained that Ramsay and his management did not repair the rooms and they were not clean. Unlike when the hotel had only positive reviews on the food, it started having mixed reviews. Its rank even went below the halfway mark for all London hotels.

Problems continued mounting up, and in 2017, another issue of debt faced Ramsay and his hotel. Previously, the hotel was top-ranked, but now it had dropped 100 places in the rankings. Gordon Ramsay put a hold on opening other hotels until he solved the problems facing York and Albany.

One of his daughters stayed there and helped Ramsay slowly bring the hotel to its high ranks. By 2020, the hotel had improved, and it started gaining more popularity and positive reviews. It has even had 4 out of 5 stars across all of the review websites.

Ramsay featured in different shows like the ‘F word’ in 2005 and the ‘American version of MasterChef’ in 2010. He then got featured in the ‘Gordon on Cocaine’ series. In addition, Gordon Ramsay: Uncharted debuted in 2019, where Ramsay traveled across the world experiencing different cultures.

Apart from featuring on television, Ramsay has also written books about cooking. He wrote the Gordon Ramsay Passion of Flavour in 1996 as his first book. Ramsay has gone on to write numerous top-selling cookbooks. Between 2006 and 2007, Ramsay has written books like the ‘Pie’ and ‘Gordon Ramsay’s playing with fire,’ respectively. Through his books, he has inspired many restauranteurs to improve their management skills even more.

Was Gordon Ramsay In The Military?

No, he wasn’t. Despite Gordon publicly stating that he will support his son throughout his military career, he hasn’t been in the military. Gordon tried to become a professional footballer but failed due to an injury. He then went straight into cooking after that, and never has he been in the military.

Yes, he can bake everything. Baking and cooking are indeed different, and there are even good Chefs who do not know how to bake. However, Gordon Ramsay can work on both sides of the kitchen. He believes that the skills one has in cooking should make it possible for them also to bake.

What Is The Net Worth Of Gordon Ramsay?

Gordon Ramsay is the third wealthiest celebrity Chef in the world with a net worth of $220 million. He has accumulated such net worth through his restaurants, books, TV shows, appearances, and sponsorships.

Gordon Ramsay’s passion for cooking has made him be in the top ten list of the world’s richest celebrity Chefs. Despite having his football dream crushed, he worked hard and became one of the most successful Chefs in the world. He has featured in different shows and has even written books to try and inspire young Chefs to be successful. What To Look For In a Personal Injury Lawyer? 6 Important... 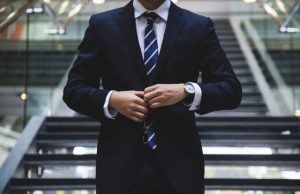 Blog
Injuries are an unfortunate fact of life, whether we like it or not. Especially when your injury is the result of someone else’s wrongdoing...

Keep In Touch With Your Community By Following These Proven Sources

Must-Know Tips On How To Go AWOL And Get Away With...

8 Useful Tricks To Help You Style Your Hair At Home