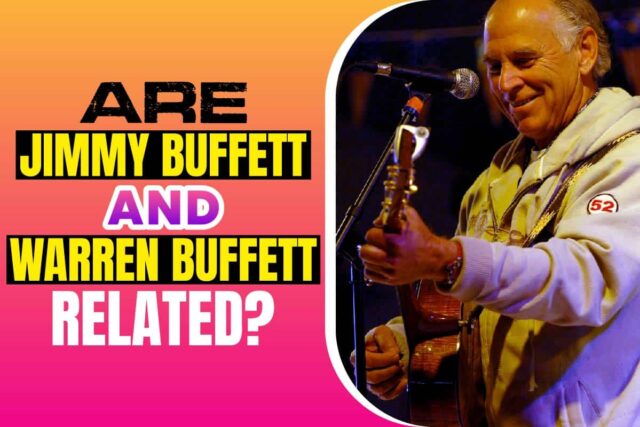 Jimmy Buffet and Warren Buffet are undoubtedly two of the most successful individuals in today’s society. Building lucrative careers in the music and business industry, respectively, both men have managed to establish a name for themselves as prominent figures in their respective fields.

Due to their thriving careers and impressive wealth, many people have speculated that both Buffets are related to each other, with some even assuming that Jimmy Buffet is Warren Buffet’s son.

Still, with all that speculation, the question remains, are Jimmy Buffet and Warren Buffet related? Unfortunately, despite sharing the same family name, both Buffets are not related. The two even underwent a DNA test to check, and the results were negative.

Nevertheless, despite the lack of blood connections, both Buffets are still leading names in their respective industries, enjoying successful careers and impressive wealth. With that said, continue reading to learn more about these two men – from who they are to their similarities and differences.

Who Is Jimmy Buffett?

Jimmy Buffett is a renowned American singer and songwriter who is popular for folk-country music. Born in 1946 in the US state of Mississippi, Buffett has written popular hit songs like “Cheeseburger in Paradise” and “Margaritaville.”

The 74-year-old musician spent his early years in Mobile County in Alabama. He went to school here as he developed his passion for music. He later left Mobile County to join the University of Southern Mississippi. Since his days at the University of Southern Mississippi, he has had a passion for playing the guitar and writing songs.

He moved to Nashville after college, where he pursued his career as a professional country singer. After releasing instant party hits, Buffett gained a huge following until he broke into the mainstream after releasing his sixth album. He has since then written popular hits over the years.

While starting his career in music, he focused on country music, with his first album being recorded in 1970. Today he has a total of 30 albums, with eight of them being gold certified. He is now a household name in the United States, especially among country music lovers.

Besides music, Jimmy has invested in other areas such as bars, restaurants, hotels, and casinos named after his hit songs. These businesses are managed under his company known as Margaritaville Holdings.

Jimmy Buffett has converted his music into a lifestyle that his fans identify with. As a result, his business empire has flourished over the years, making him one of the richest musicians of his time.

Who Is Warren Buffett?

Most people know Warren Buffett as one of the wealthiest individuals in the United States and the world. However, not many people know his story beyond his fortunes. This could be the reason people think that this 90-year-old business mogul is the father of Jimmy Buffet.

As he is popularly known, the “Oracle of Omaha” is one of the most successful business people of his time. With a net wealth value of about $100 billion, this American business magnate is ranked as the sixth richest person in the world as of July 2021. He doubles up as the chairperson and chief executive officer of Berkshire Hathaway.

Besides business, Warren Buffett is also a philanthropist. Along with other philanthropists such as Melinda Gates and Bill Gates, he co-founded the Giving Pledge charity campaign. He has over the years donated billions of dollars to charity. He is halfway to meeting a pledge he made in 2006 to donate 99% of his shares at Berkshire to five charitable organizations. Most of the donations go to organizations that promote children’s vaccination and spearhead the fight for infectious diseases.

Warren Buffett is now an aged man, but he is not planning to retire. However, he has chosen Greg Abel as his replacement when he steps down as the CEO of the multi-billion company. Warren believes that Abel will propel Berkshire Hathaway to the next level.

Over the years, there has been speculation that Jimmy Buffett and Warren Buffett could be somehow related, even if Jimmy is not Warren’s son.

In fact, some people hypothesized that the two could be coming from the same family line, considering that they share the same names. In addition, the success of both men in their industries has helped fuel this assumption.

As a result, both Jimmy and Warren Buffet decided to validate or disapprove the speculations by taking a genetic test. For this, they contacted 23andMe, well-known genomics, and biotechnology firm, to check and verify if they are indeed related.

Unfortunately, the results came back negative, disproving their fans’ long-held speculation that they are somewhat related to each other by blood.

Although Jimmy Buffett’s fortune is nowhere close to that of the successful business mogul Warren Buffett, the two popular Americans are long-time friends. Moreover, they refer to each other as “Cousin Jimmy” and “Uncle Warren,” perhaps as a result of the speculations that they are related.

In this case, Jimmy Buffett is said to have benefited greatly from the friendship, with “Uncle Warren” offering him financial tips and advice on how to build wealth. In fact, he even helped Jimmy escalate his Margaritaville song into a lifestyle that his followers would identify with.

Moreover, the successful CEO advised the talented musician on how to choose business opportunities that are appropriate for his brand. Additionally, he advised him how to hire the right people to run his business instead of doing everything by himself. His advice helped Jimmy Buffett build his music career and become wealthy.

He revealed that he performs during the meetings and holds conversations with the man he has known for over 30 years. Contrary to what people believe about Warren Buffett, Jimmy Buffett feels that his mentor is just a normal person like everyone else, only that he has a business and billionaire mindset.

Despite the lack of familial ties, there are notable similarities between these two men. Both men are successful investors who have amassed millions of dollars by making strategic financial decisions. Warren Buffett invests in insurance, manufacturing, finance, among other sectors.

Similarly, Jimmy Buffett is an accomplished investor whose wealth is about $560 million. He has a string of casinos, hotels, restaurants, and bars.

Another similarity is that the two men are conservative despite their changing fortunes. The two men have maintained their friendship for over 30 years. Interestingly, Warren Buffett lives in the same house he was living in since 1958 despite his increasing wealth.

This shows his conservative nature, considering that he was not wealthy in 1958. Still, it would be expected that he moves to a house that depicts the status of a billionaire.

They also started their careers and investment at a young age. Warren bought stock options when he was 11. At the same time, Jimmy started his music career as a teenager and developed it in his early twenties after college. This is a clear indicator that the two men had clear ambitions and goals when young.

The two successful Americans have gone through challenging times of upheaval and turmoil in their careers and professions. Warren Buffett endured the abrupt changes in the stock market when new algorithms and quants were introduced, and very few investors could relate to them.

Similarly, Jimmy endured the commoditization of the art and music industry where people could download music for free, meaning he could not sell his record albums.

Of course, although they share similarities despite the lack of familial relation, both Jimmy Buffet and Warren Buffet have their differences as well. In this case, the first major difference is their source of wealth.

Despite their similarities, thriving careers, and impressive fortune, Jimmy Buffet and Warren Buffet are not related by blood. Although many people have long held this assumption, 23andMe’s DNA test has proved otherwise.

Nevertheless, while both men aren’t directly related by blood, they enjoy a close friendship, with each one offering support and advice to the other whenever they need it.

Overall, both men have proved that they have what it takes to succeed in their respective fields and becoming leading names in their industries over the years. Questions
Humans are social, so most of them need close contact with one another to feel comfortable. You could be in school or have friends,...

Looking For An Attorney? Here Are 6 Useful Tips

Does Cafe Patron Have Caffeine? Things You May Not Know