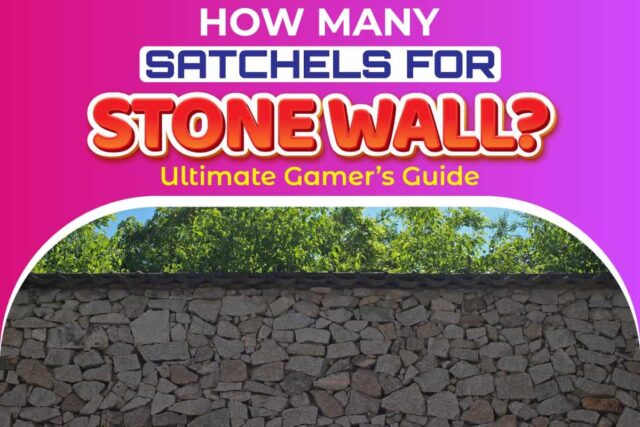 Satchels have been used in demolition for a long time, starting in World War II where engineers used them to get past heavy stationary objects.

They used them to breach bunkers, caves, destroy bridges, rails, and other obstacles.

The same concept has been applied in Rust, and you can use it to raid buildings made by other players.

You need to know the exact amount to use so that you get the desired result. Here is an accurate answer;

How Many Satchels for a Stone Wall?

You need ten satchel charges to destroy a stone wall, but satchels are unreliable in their explosion time. The same will apply to any other stone structure, including foundations, floors, stairs, wall frames, and roofs.

It takes about 30 seconds for you to craft a satchel using one small stash, one rope, and 4 Beancan grenades.

Advantages Of Using Satchels In Rust

1. They Are Cheap To Craft

All you need to make a satchel is beancan grenades, a rope, and a small stash. All these items are easy to find in the game.

Even if you want to construct one from scratch, the materials you need are easily accessible; sulfur for gunpowder, metal fragments for beancan grenades.

You can also find charcoal for gunpowder, cloth for a small stash, and one rope easily. To build one from scratch, you need wood to smelt the ore in the furnace.

2. It is much easier to find their blueprints

It is compulsory to have a weapon’s blueprint to craft it. Finding blueprints for a rocket launcher or C-4 is difficult. On the other hand, you can discover satchel blueprints in some buildings that are easy to get to.

You can get them inside monuments like the oil rig, dome, or launch site. You can also trade some of your items with other players to get a charge for you to research.

Trading is not a good idea since most players are sneaky. More often than not, the exchange will end badly for you.

A viable option is researching a satchel for 125 scraps to minimize the risks of dealing with other players.

3. They Have A Wide range of uses

You can use a satchel to break down doors, destroy walls, breach enemy bases and other structures through weak points.

What differs is the number of satchels you need, but they can do a lot for you. You can use 12 satchels to blow up an armored door and 46 satchels to take down an armored wall.

They do 43.5 damage to the most rigid materials or items in the game; this should give you an estimate of how many you need to get past any obstacle.

Satchels are cheap to craft, and they can do a lot for you, but they come with some issues. These are things you need to know to understand the risk you are getting into when using one.

Explosives To Use In Place Of Satchels

Satchels are somewhat unreliable, it takes random times to detonate, and there is a chance that they might not detonate at all.

Duds would force the player to go back and rearm, which puts them at risk of getting blown up by it.

There are several other explosives you could use in place of satchels. Some are better than satchels, while others are not better but are easier to find.

It is very cheap to craft, and it can work as a grenade to throw at other players. There are, however, many risks when working with Beancans and a 50% chance that it will blow up when you try to rearm it.

It can have a delayed fuse or one that goes off too early. This delay means that the grenade will go off while it is close to you, or you will think it is a dud, then it blows up when you pick it up to rearm.

The HV rocket is a type of rocket that is made for long-distance attacks. It does not work as well as a rocket in short-range, but it works more accurately and does more damage at long distances.

This rocket will allow you to do a lot of damage while staying out of the other player’s range. They are flexible to be fired from a rocket launcher, and they don’t need other explosives to craft.

You can get them in the same monuments as other high-tier explosives. You could also use 100 gun powders and one metal pipe to craft them using blueprints which you can research for 125 scraps.

You need 65 high-velocity rockets to take down an armored wall and 16 to get past an armored door. This process will take a lot of time, and it will be expensive for you.

Rockets can be used in raids to takedown defenses or be fired at other players during the fighting. They will explode on impact; thus, the opponent will not get a chance to escape.

It takes only one close-range hit to kill an opponent regardless of the armor they use. They are the second most dangerous weapons since they do a lot of damage with just a few hits.

In long-range splash damage, two rockets can kill any opponent. They cause 137.5 damage with each hit on the highest tier items. Fifteen rockets are enough to take down an armored wall, and only four are needed to breach an armored door.

Rockets are present in high-tier monuments like the oil rig or launch site. You can use ten explosives, 150 gunpowder, and two metal pieces.

It would help if you kept sulfur handy at all times. You need 125 scraps to research a rocket’s blueprint.

C4 the most effective weapon in the game. It can be thrown onto deployables or walls to blow them up. It is automated, and it sets the timer and gets armed once you throw it at a target.

It is the most reliable explosive in the game with a steady 10- second timer which gives you a chance to get out of range.

C4 the best weapon when raiding high-level bases since it does the most damage, and it will be cheaper for the raid.

One hit deals 275 damage on all higher-tier constructions and objects. You need 2 for an armored door, 1 for a sheet metal door, and 8 for the hard side of an armored wall.

You can only craft C4 on a tier-3 workbench using five cloth, 20 explosives, and two tech trash. They can only be found in the oil rig or other highest-tier monuments.

You need 500 scraps to research the explosive’s blueprint.

You must have ten satchels to go through a stone wall. Satchels are easy to craft, and their blueprints are easy to find in the game.

You can use them in many different ways depending on your need, but they work best in going through a metal sheet. A big issue with the satchel is that it is unreliable.

It detonates inconsistently, and at times, it can be a dud that will waste your time and put you at risk of getting hurt by your weapon.

To improve your chances, you should opt for more efficient weapons like C4 or rockets. These weapons do a lot of damage in a predictable manner that keeps you safe. How Should Businesses Respond To Cybersecurity Issues Of Digital Age Business
Do you run a business and have concerns about how to protect your company in the digital age? You're not alone. As we continue...

Everything You Need To Know When Filing A Water Contamination Claim

How To Perfectly Grow Healthy Plants